Original paintings of candles and flames go on show in Norwich art gallery.

Great Yarmouth artist Jane Hall is best known for her colourful paintings of ice creams. amusements arcades and all the other 'Kiss Me Quick' sights associated with the traditional British seaside holiday. However, a new body of work sees her art take on a quieter, more contemplative theme - the candle and the naked flame. In these new works, she depicts candles against different coloured backgrounds, exploring how the different settings (and also the different coloured candle waxes) affect the intensity and glow of the luminous flame.

These new original paintings of candles have a sense of peace and calm about them. To some art lovers they invoke religious spirituality or remembrance of those lost and sadly missed, while others are reminded of the romance of the candlelit dinner for two, or see the glowing light as a beacon of hope and a way of brightening a dark, cruel world. But then isn't that the very essence of art? It allows us the time to stop and stare and see what we want to see, or perhaps even what we need to see. It attracts, magnetises and compels us to look - much like the beauty of a naked flame.

The lights in convenience shop window might seem like an unlikely subject for art, but not to Norfolk artist Jane Hall. 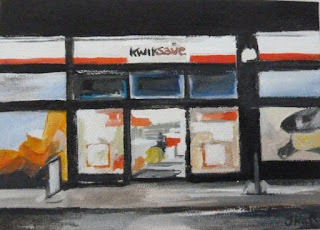 Jane Hall's 'Postcards From Great Yarmouth' series of paintings take an unusual and highly individual look at the seaside town in which she lives and works. Rather than focusing on the colourful seafront sights for which the town is best known, they take as their subjects the back streets and side streets of Yarmouth. It is here Jane finds her artistic inspiration in the town's many convenience stores, kebab shops, Chinese takeaways and launderettes. And what makes these buildings stand out to her? It appears to be the hopeful glimmer of light. 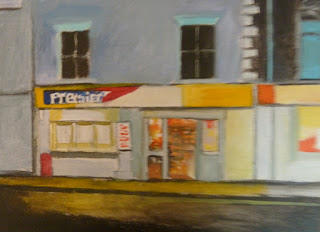 That glimmer of light might be coming from the interior of a convenience store, or it might be the glowing signage illuminating an otherwise bleak-looking fish and chip shop doorway. But it always suffuses the painting with an ethereal glow and acts like a beacon in the murky darkness - a beacon designed to pull the punters in to buy a portion of chips, a can of lager or whatever is on special offer that day.

The 'Postcards From Great Yarmouth' series of original paintings provides an exciting contrast to Jane's more familiar pictures of ice cream cones and amusement arcades. They show the real side of Yarmouth - the one where the natives live and which the holidaymakers seldom see. It is a world of grit and darkness, but always with hopeful glimmers of intense light, which these paintings capture perfectly.

Jane Hall's 'Postcards From Great Yarmouth' are currently on show at Harvey Wilson's Secret Gallery, 33a Market Row, Great Yarmouth, as part of the 'Seaside Seductions' exhibition running till September 9th. They can also be viewed online at www.jane-hall.co.uk.
Posted by Kelly James at 11:26 No comments: 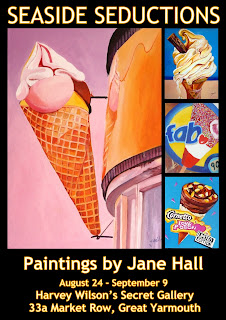 This week sees the launch of a new exhibition of seaside-themed paintings by the Great Yarmouth artist Jane Hall. Taking place at Harvey Wilson's Secret Gallery over the coming three weeks, this exciting new art show sees the popular artist filling Norfolk's most bohemian gallery with her usual mixture of paintings based on the Yarmouth's seafront culture - so think ice creams, fruit machines, amusement arcades, hot dogs, fish and chips and all the traditional British seaside sights. 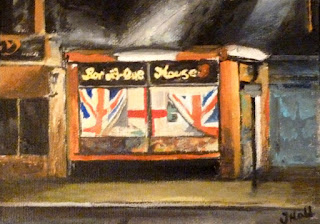 Jane will also be exhibiting the latest pieces in her highly successful and collectible 'Postcards From Great Yarmouth' series. These smaller works - each the size of a traditional seaside postcard - take as their subjects some of the lesser known sights of Great Yarmouth. They focus on the back streets and side streets of this quintessential seaside holiday town, capturing the night-time lights in convenience stores doorways, kebab shop windows and takeaway restaurants.

Seaside Seductions runs from 25th of August to the 9th of September 2015 at Harvey Wilson's Secret Gallery, 33a Market Row, Great Yarmouth. The gallery is open Monday to Saturday from 9.30am to 3.30pm, with a special late night opening between 6pm and 9pm on Friday 28th of August.
Posted by Kelly James at 09:10 No comments:

This week sees the opening of a new art exhibition featuring postcard-sized paintings of Norwich by the artist Jane Hall. 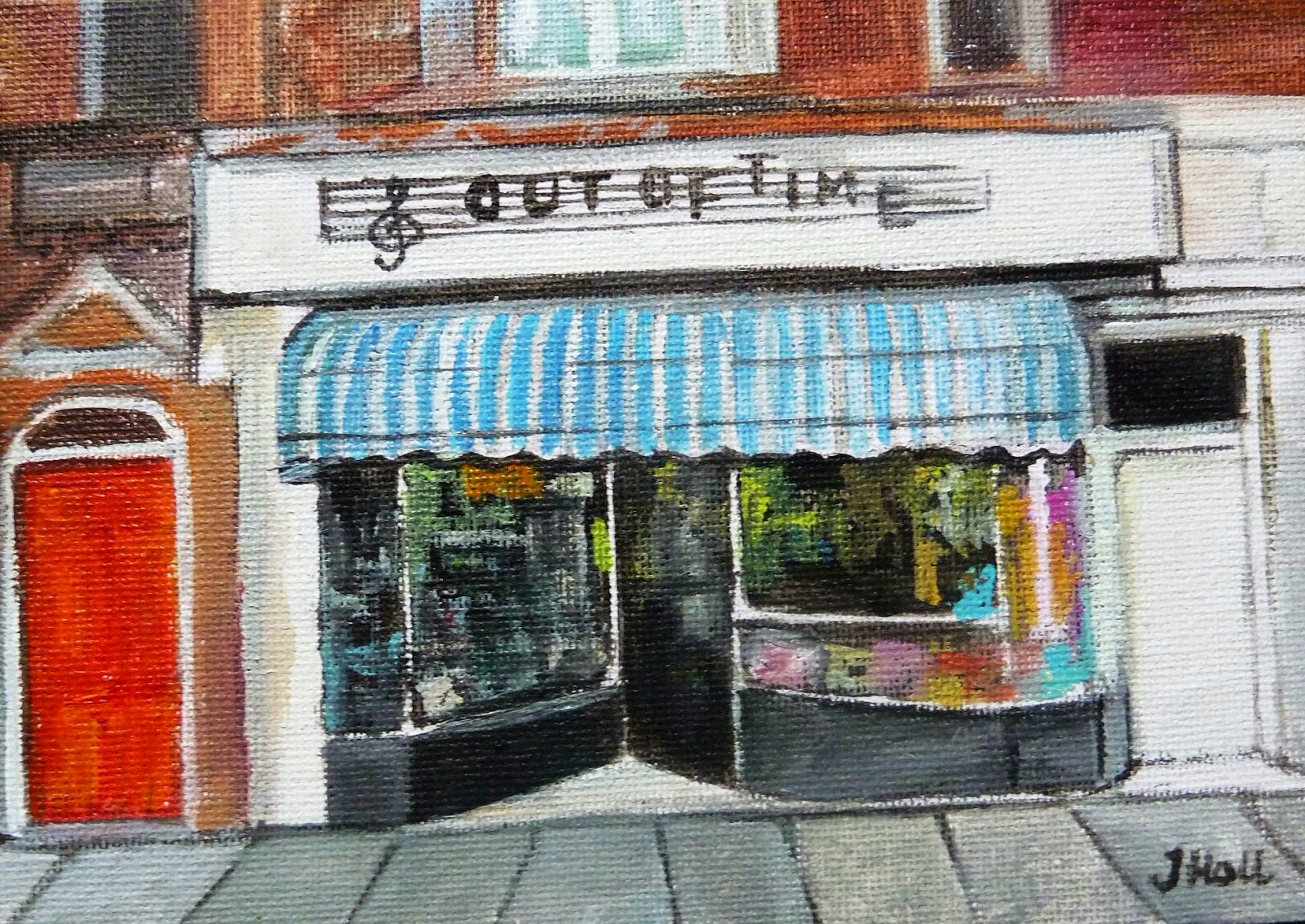 A hidden gem, The Mustard Cafe in Norwich's Bridewell Alley, is not just a must-go place for a coffee and a cake. Because this thriving Norwich eaterie is also gaining a reputation for displaying some of the best art by Norfolk's many talented artists, including Great Yarmouth painter Jane Hall. This month the cafe is showcasing some of Jane's popular postcard-sized paintings of Norwich scenes. They include the Out of Time record shop, Wensum Food & Wine and Retreat Vintage Store on St. Benedict's Street. 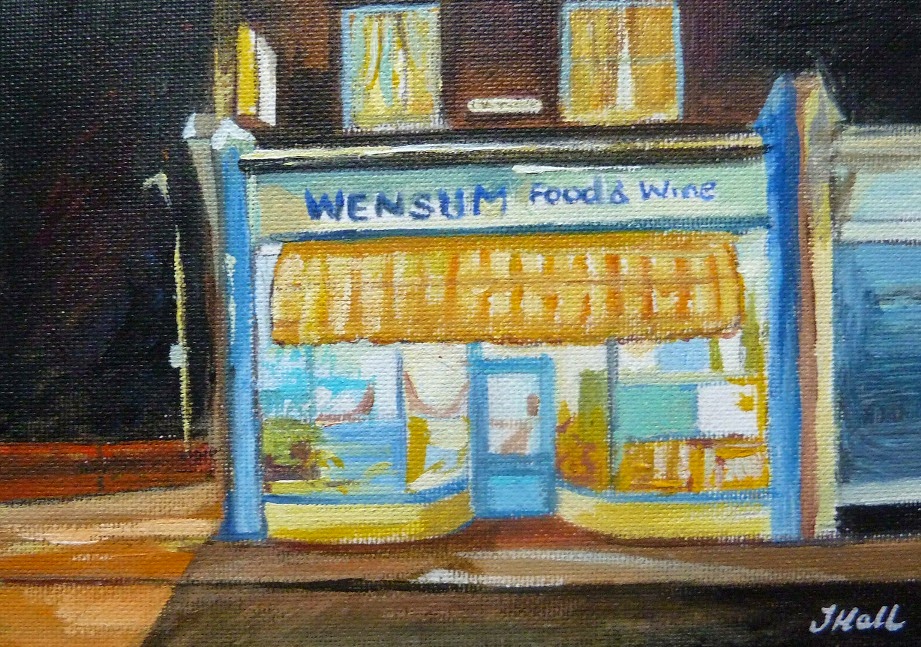 Jane Hall's 'Postcards from Norwich' paintings build on the success of her 'Postcards from Great Yarmouth' series, which focus on the familiar seaside sights of Great Yarmouth, as well as back street scenes, kebab shops and convenience stores. They will be on display at the Mustard Cafe from the 4th to the 25th of February, so why not pop in for a coffee and a nice piece of cake... and view some fantastic artwork while you're at it?

The Mustard Cafe is located on Bridewell Alley, Norwich, NR2 1AQ.
Posted by Kelly James at 10:42 No comments: When Jane Hall started painting sex shops paintings for a solo show at the Reading Room in Soho's Frith Street in 2012, she had no idea how quickly London's changing landscape would trigger the closure of so many of the stores she chose to paint. Established sex shops and strip joints that had been a feature of Soho for years and years quickly began to close their doors. Cursed by crippling license fees, the boom in Internet sex toys and clean up campaigns, these colourful, vibrant and enticing stores were suddenly replaced by endless coffee shops, clothes boutiques and convenience stores. 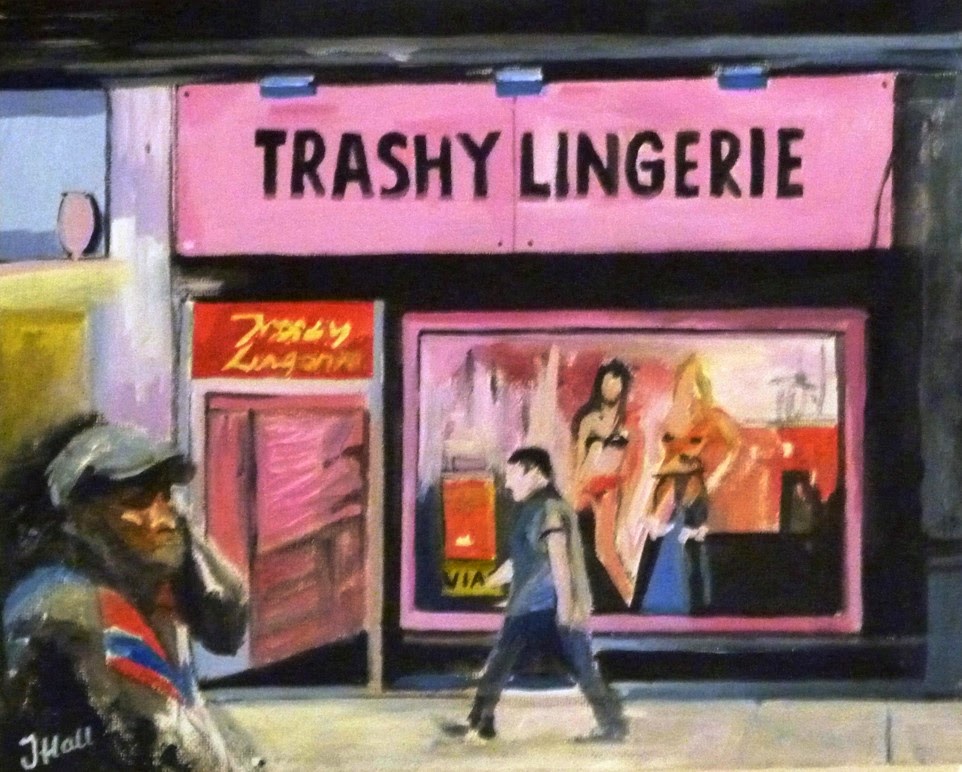 "It's amazing how many of these shops have gone now," says Jane, just back from a trip to London. "Places like Janus, the Private Shop, Trashy Lingerie and Lovejoy's were thriving just a few years ago, but now they're gone forever - and have been placed with something much more bland. In fact, it's bizarre that a place like London doesn't have a booming sex shop industry, because everywhere else I go to in Europe really celebrates that kind of thing. But then we've always been a very prudish nation, so I guess I shouldn't really be surprised." 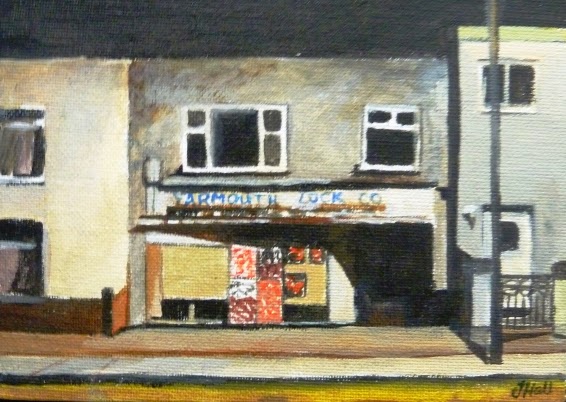 Following on from their succesful debut at the SEASIDE SENSATION 3 exhibiton at Great Yarmouth Library, local artist Jane Hall's new 'Postcards From Great Yarmouth' paintings have gone on show at the Painters Palette art gallery on Caister Road, Great Yarmouth. Capturing various aspects of the popular seaside town by both day and night, the paintings depict subjects such as the derelict Yarmouth Lock Co building on St Peter's Road and Domino's Pizza on King Street. And then there are the seafront pictures showing Rod's Seafoood stall and the Leisureland amusement arcade. 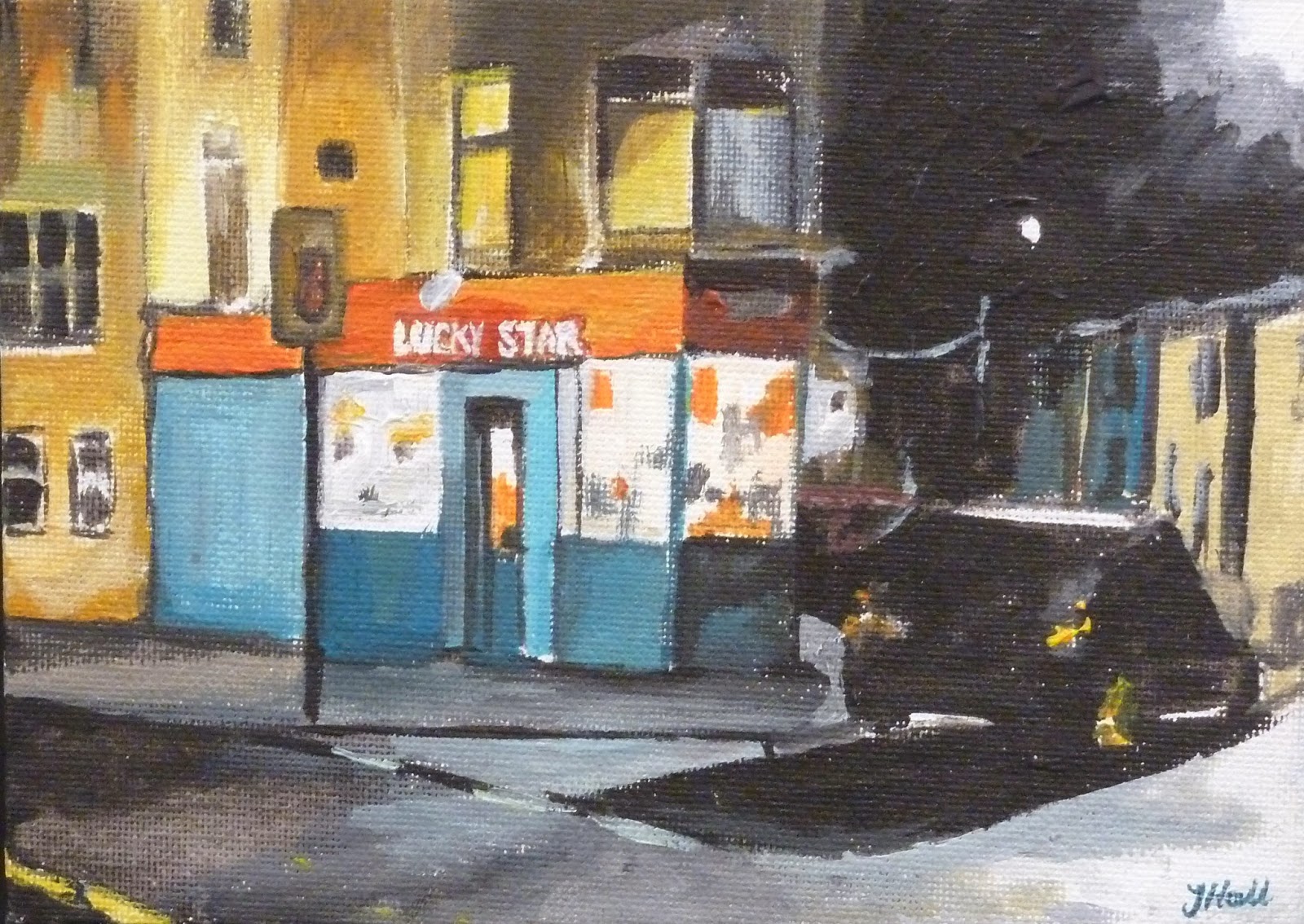 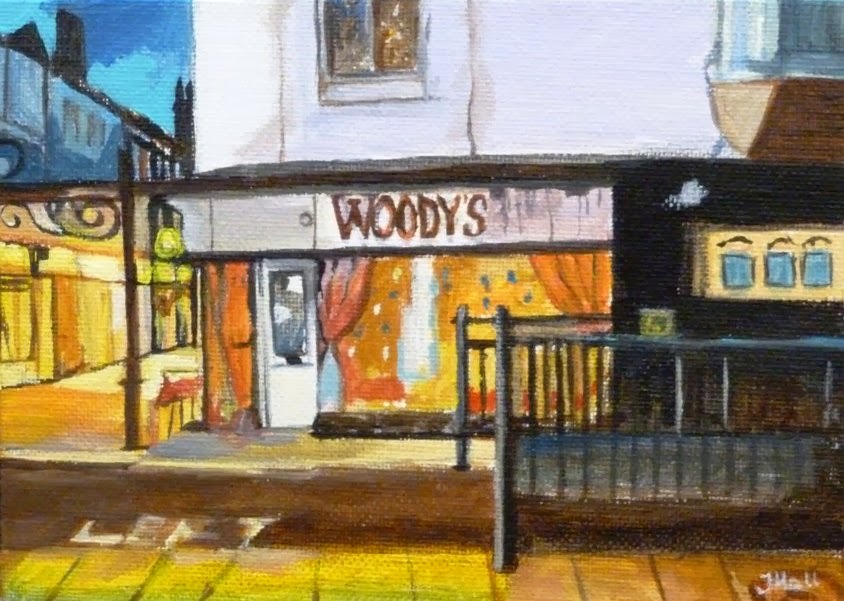 There is more to Great Yarmouth artist Jane Hall than colourful paintings of ice creams and fruit machines. Though much of her artistic work is centred on her home town's vibrant and flourshing seaside, she is also inspired by Yarmouth's back streets, cafes, convenience stores and take away shops. Many of these less obvious subjects for paintings are captured on canvas late at night, with the light in a window or the rain on the pavement adding mystery and mood to these striking works of art. They are also mostly painted in a miniature format, which echoes the size of the seaside postcards for which Great Yarmouth is so well known. 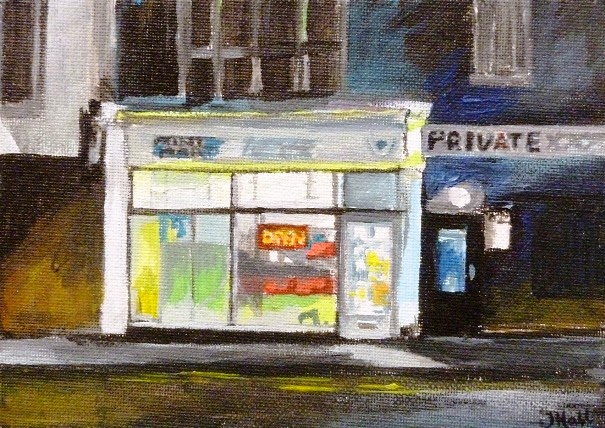 These new 'postcard-sized' paintings are a step in a new direction for Jane Hall. She explains: 'There were a number of interesting buildings in town that I'd wanted to paint for many years, but for some reason I had never quite found the right way of making them work as paintings. I kept playing around with various ideas for them, then eventually decided to try one in a really small format. It was a picture of the Lucky Star takeaway on St. Peter's Road, and as soon as I did it on a 7x5-inch canvas, I knew I was onto something. The miniature canvas was just the right size to allow me to inject real life into the image; and so I've carried on creating more and more pictures in a similar vein capturing various aspects of this fascinating town.'

Jane Hall's 'Postcards From Great Yarmouth' series of original paintings is currently on show at the Rumbelow Gallery, which is located upstairs in Great Yarmouth Library. The art exhibition is open daily from 9am to 5pm, with late opening on Wednesday night till 7.30pm. The show runs until Saturday 22nd February 2014 and admission is free.
Posted by Kelly James at 06:30 No comments: